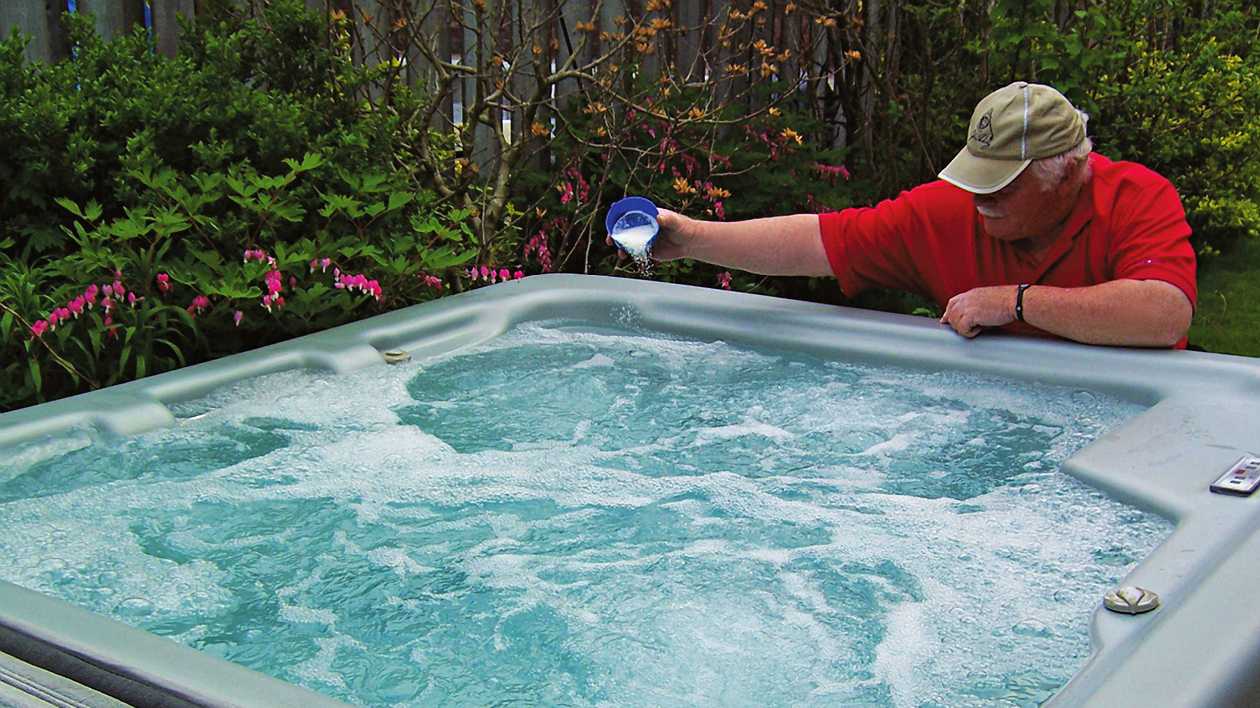 Sanitation is a very important (if not the most important) aspect of hot tubs. Many different solutions exist to keep water sanitized, and new discoveries are made every year. One of them in particular has been overlooked in the past but is starting to gain popularity in the hot tub industry: bromine. Before we go into more detail, let’s take a look at what options are currently available on the market for customers.

What is a sanitizer?

A sanitizer is an agent that will keep your water clean by killing or neutralizing contaminants such as bacteria, ammonia, viruses and other agents which are harmful to humans. They prevent, for example, the spread of diseases and infections, such as E. Coli, Legionnaires’, and Giardia, from other bathers. These agents also help your filter keep your water clear by killing and oxidizing algae. This is an absolutely necessary step to take, especially for hot tubs, as the higher water temperatures offer a great breeding ground for bacteria. Unsanitized, or improperly sanitized, water can lead to severe illnesses, and sometimes even death. Deciding on a sanitizer should not simply be a matter of what is cheapest – it is a decision that needs to be based on the needs of the customer, and what will keep them and their families healthiest. A big family that uses the spa many times a day will have different needs, for example, than a couple who uses it once a month.

Sanitizers can be placed into two main groups: non-residual and residual.

Non-residual sanitizers will only sanitize water when it goes through the system, meaning that in order to be completely sanitized, all the water from a spa must have passed through one particular point in the plumbing. In addition, not all of these systems kill all the contaminants. For both of these reasons, non-residual sanitization is considered strictly supplemental and should be used only in conjunction with a main residual sanitizer. These non-residual systems, such as ozone generators, UV lights, and ionizers, will give users the added benefit of using fewer chemicals.

Residual sanitizers work by building a bank of sanitizing chemical agent in the water. These chemicals stay suspended in the water, ready to act whenever a contaminant is introduced. Contrary to non-residual, where the water may need to circulate for a few minutes before being treated, these chemicals can kill contaminants the second they are introduced. After reacting, a molecule of sanitizer will become spent, requiring the addition of new sanitizer in the water. At the moment, the two sanitizers registered with the EPA (and Health Canada) are chlorine and bromine. Products that do not have to be registered with one of these regulatory bodies may be safe, but will not be strong enough to be effective.

o Advantages: Softer on the skin and eyes, non-volatile, effective on a wider range of pH and at higher temperatures

o Disadvantages: Higher price, not for prolonged use in sunlight

Pure bromine is a chemical element in the halogen family. Its chemical properties are similar to chlorine’s, except it is a liquid at room temperature instead of a gas. This results in a much more stable sanitizer that does not evaporate and is effective at higher pH levels, making it ideal for hot tubs. For example, at a pH level of 7.8, bromine still has about 85% of its efficiency and chlorine is under 30%, which means that bromine users don’t have to monitor and adjust their pH as strictly for the sanitization to be effective.

However, bromine does not do well with prolonged exposure to UV light, as the UV light breaks it down. This same process happens with chlorine, as well, which is why chlorine is used with a stabilizing agent. What this means is that bromine is best suited for covered or indoor applications.

Just like traditional chlorine, Bromine can be introduced to the water in the form of granules, powder, or even liquid. These products are very common under many different brands and can be found at almost every hot tub dealership. These "hockey pucks" contain part bromine and part chlorine (which is used as the oxidizer to activate the bromide). Users simply add the required quantity of BCDMH into their tubs in order to build the required bank, and then maintain it. This type of product requires regular addition of chemicals in order to keep enough residual sanitizer. Along with having to be present on the site regularly and take the time to add chemicals and re-balance the water, the residual build up from frequent topping up may increase scaling and could cause skin irritation, requiring more frequent dumping of the spa water.

These systems are installed in the plumbing (usually after the heater) of the spa and send a small electrical charge through the water as it passes through conductive plates in the device’s reaction cell. Pure sodium bromide, commonly called bromine salt, is added once to the water, where it separates into sodium ions and bromide ions. These ions alone have no power of sanitation at all, but in contact with the electrical charge the bromide ions absorb the energy and transform into available free bromine. The free bromine, or just bromine, then becomes suspended in water, ready to react upon contact with any contaminant or impurity. When this reaction occurs, the unwanted particle gets neutralized and the bromine goes back to being a bromide ion. This means that with these devices bromine is infinitely recyclable and the sodium bromide should never get depleted unless physically removed from the spa. Because bromine does not evaporate, sodium bromide only needs to be balanced after significant water loss (splash out or draining).

While these systems have higher initial costs, they provide many benefits to their users, such as eliminating the need to add additional chemicals for sanitation. Water parameters will also be less affected over time, thus reducing the need for regular balancing. As a result, water will not only be softer, but will also stay this way for a longer period of time. All of this makes for a very low-maintenance system that keeps the spa clean at all times, whichis great, for example, for people with cottage spas. Also, as opposed to BCDMH, these devices produce entirely chlorine-free spa water. Finally, bromine generators only make bromine when there is water flowing, requiring usually at least 8 to 12 hours of run time per day. Therefore, they are best used with a circulation pump in hot climates.

Features to look for in a bromine generator

Because not all devices offer the same functionality, here are some key features that a generator should possess, in addition to an easy-to-use user interface, in order to provide a better experience and efficiency while having the longest lifespan possible.

- Uniform water flow through the cell: In some systems, water will not circulate properly through the conductive plates, leaving dead spots or zones of higher activity. This will greatly limit the device’s efficiency and, over time, increase the chances of some plates breaking off. Systems with reaction cells that are in-line with the water generally perform the best.

- Regular inversion of the cell’s polarity: Scale deposits will appear slowly over time on one pole of the cell, which will eventually require cleaning. Recent systems reverse their polarity every few minutes to prevent lime build up and greatly reduce, if not completely eliminate, the need for cleaning.

- A shock or boost mode: The bromine bank will deplete much faster when users are bathing. In order to raise the bromine back to the recommended quantity as fast as possible, the same way that one would add chlorine or bromine after usage, the bromine production needs to be much higher than the normal, “maintenance” level. Having a separate mode of operation to fulfill this purpose that switches automatically back to normal production when the free bromine level is back up will eliminate the inconvenience of users having to increase their production setting when bathing and then returning to the original setting a few hours later. Forgetting to do so could also cause issues, thus only having to press a button once when bathing is much safer.

A 2004 study presented to the EPA by Mike Robinson showed that bromine is not only a great sanitizer, but that it is also a disinfectant, which works more quickly than a sanitizer. In order to make sure no harmful by-products are created by bromine systems, the Environmental Protection Agency requires the sodium bromide to be registered under the Federal Insecticide Fungicide Rodenticide Act (FIFRA). The EPA requires Efficacy Studies which include how well a product works, risk assessment demonstrating the potential risks associated with use and a field study. These field studies are controlled, and include bacteriological and chemical testing in hot tubs using the product undergoing review. Risk assessment is calculated using preset guidelines from the EPA regarding different ions, bather load, temperature and more. All results are passed through a committee, and often follow-up studies are done to clarify parameters or to give more in-depth results.

The EPA laws exist to protect consumers. Using unregistered sodium bromide is not only illegal, but may be potentially harmful. If you are selling or using an unregistered sodium bromide to be used in a bromine generator you are in violation of FIFRA. Depending on where you are, the severity of the infraction, and the nature of your business, you could be looking at up to $500 000 in fines and three years in prison. It must be also understood that sodium bromide for use with bromine generators must be registered with the EPA in all 50 states in the U.S. A similar law (Pest Control Product Act) also exist in Canada: Health Canada requires all pesticides (including bromine) to be registered with a process resembling the EPA’s registration.

While it may not be as well known as chlorine, bromine presents many advantages over chlorine for hot tub sanitization. It is much more stable in the high temperatures of a hot tub, it produces less odor, and it doesn’t require a stabilizer. As long as sunlight exposure is kept to a minimum, it is probably the best option out there. Generators are also well worth the investment, even if they are relatively new to the market. Especially for customers who are new to hot tub ownership, who may be put off by the maintenance required to balance chlorine, or bromine in other forms. Generators are also useful for clients who travel, have a secondary spa, or who don’t have the time to balance their water frequently (potentially putting themselves at risk). Take the time to do the research and understand the pros and cons of each product, and make decisions based on what is best for each individual’s needs. Regardless of the option chosen by the customer, it is very important to make sure that every product meets the appropriate safety standards.

For more information visit http://laws-lois.justice.gc.ca/eng/acts/P-9.01/ in Canada, and http://www.epa.gov/oecaagct/lfra.html in the US. The University of Perdue has a list of registered products that you can find at http://ppis.ceris.purdue.edu/. Health Canada has its database at http://pr-rp.hc-sc.gc.ca/pi-ip/index-eng.php.

The advantages of color

Finding a professional to install your spa

Take advantage of the soothing benefits of hydrotherapy in the comfort and convenience of your own backyard.

Take advantage of the soothing benefits of hydrotherapy in the comfort and convenience of your own backyard.

The disinfectant of choice for hot water maintenance.

Before buying a spa, consider the following points…